I'm now posting all my Ashley Gardner news on the blog attached to my revamped website, so please travel there to read all the news about the Capt Lacey series and new books coming up:

Blog posts are listed in the top left column; click on the post's title to read, then use the "previous" and "next" within the post to scroll through the blog.

You can subscribe to my updates there as well, to be alerted when something new is happening.

Disappearance in Drury Lane is OUT!

A Disappearance in Drury Lane is out! Today! Now! I am bouncing off the ceiling.
It can be ordered from:

The PRINT edition files have been submitted, and should be available for purchase by next week. Likewise the Apple edition is wending its way to iTunes via Smashwords.

Thank you so much for your patience and support on this book's release. It was a journey!I hope you enjoy it.

Murder in Grosvenor Square is next!

See more about the series at http://www.gardnermysteries.com
Posted by Jennifer Ashley/ Allyson James / Ashley Gardner at 9:44 AM 1 comment:

Because I can, I have put the e-version of the first boxed set of the Captain Lacey Regency Mysteries on sale for 99 cents for a limited time. If you or a book lover you know have been meaning to try this series, you can now for a great price! Hope you enjoy it. And Disappearance in Drury Lane will be up September 20! 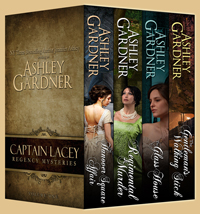 A Disappearance in Drury Lane Available for Pre-Order

Great news! A Disappearance in Drury Lane has been made available for pre-order at Amazon: http://www.amazon.com/Disappearance-Captain-Regency-Mysteries-ebook/dp/B00ELUVAJ0/

I'm very thrilled I am finally able to bring this book to you.
Posted by Jennifer Ashley/ Allyson James / Ashley Gardner at 12:31 PM No comments:

On Friday, I typed THE END on A Disappearance in Drury Lane. And there was much rejoicing. The release date for this book will be September 20, 2013.
Excerpts will be posted soon. I will be busily revising / rewriting then sending the ms to an editor in order to meet that publication date. More news on that as it happens.
In other news, A Regimental Murder, is available in print in a new trade paperback. I gave it "expanded distribution" which means that (eventually), booksellers will be able to special order it, and it will be available online at Amazon, B&N, Book Depository, and other places.
For now, the print version is available on Amazon:
http://www.amazon.com/Regimental-Murder-Captain-Regency-Mysteries/dp/1490557946/
The rest of the books not already in print will soon follow! Drury Lane will also be out in print at the same time as or shortly after the ebook.
Sign up for my newsletter to get an email blast when Drury Lane is released, plus check back here for more important updates!
Posted by Jennifer Ashley/ Allyson James / Ashley Gardner at 11:41 AM No comments:

I am now about 3000-5000 words shy of finishing the next Captain Lacey book (that's about 2-3 chapters depending on how much I have left to tell--I don't adhere to a rigid word count). I will have this done by the end of the week and be able to project a pub date.

Be sure to subscribe to my book info email blasts to be notified as soon as Disappearance in Drury Lane is available.

In other news, the print edition of Regimental Murder should go live very soon (I submitted it; just waiting for the vendors to get around to putting up the order buttons). Plus I'm still looking into getting these books into audio. I will, one way or another.

I'm about 20K words away from finishing the draft of Drury Lane. (For me, about 80 pages.) Then will come rewrites / revisions (which take nowhere near as long as writing the first draft), then editing by an outside editor, then proofing. I will do my best to get the print version out alongside the e- version or very soon thereafter. As soon as I type "The End" I will post a pub date! (I already know it, but again, the whole jinx thing is keeping me from saying it yet.)

I'm also interested in getting Captain Lacey out in audio. I think this series would lend itself well to being read aloud.

That said, I've heard from audiobook companies that cozy mysteries sell poorly in audio. Mystery fans, are you audiobook fans? I've listened to mytery audiobooks (the Cadfael series; Dick Francis; Mary Higgins Clark), and while I'm not a huge audiobook fan (I like to read fast), I enjoyed them.

Opinions? Would you like Captain Lacey in audio? Is it worth it for me to pursue it?
Posted by Jennifer Ashley/ Allyson James / Ashley Gardner at 7:00 AM 1 comment: